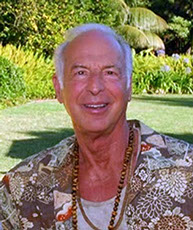 Eric Small has long been active in the community, serving as Vice-President and Trustee of a family charitable fund and Trustee of Stress Control Systems for which he is principal instructor in Iyengar Yoga. He served on the boards of the Will Rogers Polo Club, Big Brothers of Greater Los Angeles and the City of Hope, the MS Society, Southern California Chapter, USC, and the Doheny Eye Institute. He has also sat on the Board of Governors of Cedars-Sinai Medical Center and was Vice- President of the 1990 National Iyengar Convention in San Diego.

Born in Avalon, Catalina Island, Eric Small completed his BA at UCLA and earned a Master of Fine Arts at Otis Institute. He holds a Senior Intermediate Level II Certificate from the B. K.S. lyengar lnstitute in Puna, India. Eric also conducts teacher-training workshops in therapeutic yoga around the United States.

He was diagnosed with MS at 22 and soon after became a serious student of Iyengar Yoga, which helped him with the effects of his illness. He has been teaching Yoga since the mid-1960's. He has instructed at UC Berkeley, for Los Angeles Unified School District, Beverly Hills Adult Education and the Iyengar Yoga Institute, Los Angeles, as well as serving on the teaching staff of Iyengar Yoga conventions, both domestic and international. He frequently travels throughout the US conducting Yoga workshops and seminars for both MS and non-MS students and instructors.

Through his Stress Control Systems Trust, Eric Small creates programs specifically for clients diagnosed with MS and other neurological conditions. The programs enhance Students' ability to carry on with their lives. A video of his MS program was produced in 1999, in cooperation with the Northern and Southern Chapters of the MS Society in California. Programs are under the guidance of B.K.S. Iyengar of Poona, India and are based on his teachings and philosophy.

His work was recognized in 1999 with the Hope For MS Award and in 2001 by his induction into the National MS Society Volunteer Hall of Fame. He was the 2002 Dorothy Corwin Spirit of Life Award recipient for Outstanding Volunteer Service to MS patients, presented at the MS Dinner of Champions on September 17, 2002.
All images and content thereof Copyrighted © Eric Small, 2015  All rights reserved.
Any duplication, distribution or use without written permission is prohibited and a violation of applicable law.